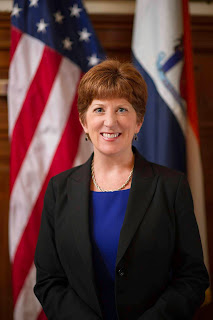 ***Note: meeting date changed to avoid schedule conflict***
Mayor Kathy Sheehan will address the first Albany Roundtable luncheon of 2019 on Wednesday, January 16 at the National Register-listed University Club, 141 Washington Avenue at Dove Street in Albany. The Roundtable usually meets on the second Wednesday of the month but is changing the date of the January 2019 meeting to avoid potential scheduling conflicts with other anticipated area events. Albany Roundtable luncheon meetings are open to the public.

Mayor Sheehan became the 75th mayor of Albany in 2014. On January 1st 2018, she was sworn in for her second term.  Mayor Sheehan has dedicated her administration to unleashing Albany’s full potential, leading with a commitment to community, equity, and opportunity. She is an energetic champion of the renaissance now underway in Albany, and is working to revitalize all of the City’s neighborhoods.

She is also a founding member of the AlbanyPromise, a coalition of community members, educators, service providers and business leaders working to ensure that every child in Albany succeeds academically.

“Key is pleased to be a long-time supporter of the Albany Roundtable, especially the Mayor’s annual address,” said Ruth Mahoney, President of KeyBank’s Capital Region Market and Regional Retail Executive. “We’re committed to supporting the Mayor’s vision for the city and region, as well as doing our part to help create thriving futures for the people and communities we serve. The Albany Roundtable aligns with all of our priorities –Neighbors, Education and Workforce Development.”

Please note that the date of the February luncheon will also be changed to avoid a schedule conflict. The Roundtable will welcome Dr. John Bennett, president and CEO of CDPHP, on Tuesday, February 19.

The cost for the January luncheon is $20, which may be paid at the door. The Roundtable also offers its guests the option of paying in advance with a credit card at www.albanyroundtable.com. The University Club will serve a hot and cold buffet from 12:00 noon to 1:00 p.m., with the program commencing at 12:30. Reservations for the January 16 luncheon are required by Monday, January 14 and may be made by prepaying online, by calling and leaving a message to register at 518-992-5360, or by sending an e-mail to albanyroundtable@gmail.com.

Posted by Danielle Sanzone at 3:07 PM