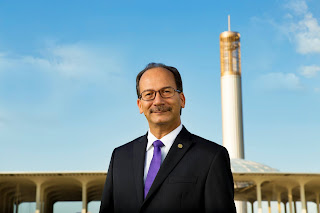 ALBANY, NY –  As the New York State budget process continues, the Albany Roundtable has invited University at Albany President Havidán Rodríguez to discuss higher education funding, how it impacts UAlbany and his vision for the University moving forward.

Dr. Rodríguez
took office at UAlbany in September with more than 25 years of experience as a leader in higher education.

Prior to his leadership positions in Texas, Dr. Rodríguez spent seven years at the University of Delaware as deputy provost, vice provost for academic affairs and international programs, and professor in the Department of Sociology and Criminal Justice. He also directed UD’s acclaimed Disaster Research Center, the world’s first research center devoted to the studying the complex social problems that result from natural and technological disasters and other community-scale crises.

Dr. Rodríguez has also held faculty and administrative positions at the University of Puerto Rico-Mayagüez, and served as Director of the Minority Affairs Program for the American Sociological Association (1995-1998). A respected scholar, he studies the socioeconomic impacts of disasters and the economic well-being of minority populations in the United States and Puerto Rico.

This event is being sponsored by the University atAlbany Alumni Association.

The cost for the luncheon is $20, which may be paid at the door. The Roundtable also offers its guests the option of paying in advance with a credit card at www.albanyroundtable.com. The University Club will serve a hot and cold buffet from 12:00 noon to 1:00 p.m., with the program commencing at 12:30.

Reservations for the March 14 luncheon are required by Monday, March 12 and may be made by prepaying online, by calling and leaving a message to register at 518-992-5360, or by sending an e-mail to albanyroundtable@gmail.com.
Posted by Unknown at 2:38 PM