Carm Basile, CEO of CDTA, to address Roundtable on 11/14 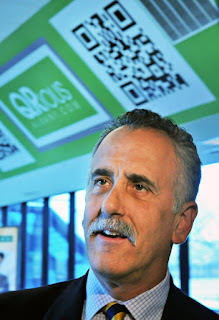 Carm Basile, Chief Executive Officer of the Capital District Transportation Authority (CDTA), will address the Albany Roundtable on Wednesday, November 14, and discuss CDTA’s history of connecting Upstate New York. Albany Roundtable luncheon meetings are held at the National Register-listed University Club, 141 Washington Avenue at Dove Street in Albany, and are open to the public.
CDTA was created in 1970 by the New York State Legislature as a public benefit corporation to provide regional transportation services by rail, bus, water and air. Today’s CDTA is the premier mobility provider in the Capital Region, providing regular route bus service, shuttle systems and paratransit services. CDTA owns and operates the Rensselaer Rail and Saratoga Springs Train Stations. The Rensselaer Rail Station recently celebrated its 10th anniversary, serving as a Capital Region success story.  CDTA also operates the Northway Xpress Commuter Service between Saratoga County and downtown Albany. CDTA’s BusPlus program is a limited stop service on Route 5 between downtown Albany and downtown Schenectady that provides riders train-like service with added convenience and accessibility.  Today, 650 people work at CDTA to deliver a transit system that serves more than 800,000 people who live and work in the region, transporting more than 55,000 customers each weekday.
Carm Basile was appointed CDTA’s Chief Executive Officer in September 2009, and is responsible for the operation of the Authority’s fleet, facilities, staff and management. He has worked for CDTA since July 1981, holding a number of senior level positions, including Deputy Executive Director for Business Development, Director of Business Development, Chief of Staff, Director of Marketing and Transportation Planner.
Mr. Basile serves as a Board Member at the Colonie Chamber of Commerce, the Clearview Center, Colonie Senior Services and the Sports Foundation of the Capital Region. He serves as Board Member and President of the New York Public Transit Association and is a Board Trustee for Christian Brothers Academy. Born and raised in Springfield, Massachusetts, he holds a BA degree in Urban Studies from Worcester State College in Worcester, Massachusetts.
The cost for the luncheon is $20, which may be paid at the door. The Roundtable is also offering its guests the option of paying in advance with a credit card at www.albanyroundtable.com. The University Club will serve a hot and cold buffet from 12:00 noon to 1:00 p.m., with the program commencing at 12:30.

Reservations for the November 14 luncheon are required by Tuesday, November 13 and may be made by prepaying online, by calling 518-431-1400 (the Albany Colonie Regional Chamber of Commerce) or by sending an e-mail to albanyroundtable@yahoo.com.
Posted by Moderator at 1:20 PM 3 comments:

Jeffrey Mirel, Founder of Albany Barn, Inc. will be recognized for leadership in creative arts, economic development and community building


The Albany Roundtable has selected Albany Barn, Inc, its board of directors, and founder Jeffrey Mirel to receive its prestigious New Patroon Award for the organization’s efforts to cultivate support for the arts and develop a permanent, sustainable 21st Century creative arts incubator and community art center in Albany. The award will be presented at the first meeting of the Albany Roundtable’s 34th season on Wednesday, October 10th.

Register for the 10/10 Roundtable Lunch


A founding principle of Albany Barn is that art transforms communities. The organization’s name originates from the tradition of barn-raising, when a community came together to build a barn. In turn, that barn would enable a family to contribute to the prosperity of the entire community. Albany Barn is a community effort to “Raise The Barn” and lift Albany’s artists, youth and neighborhoods.

“Since 2004, the visionaries behind Albany Barn have leveraged the talents and passion of creative artists to support worthy causes,” said Colleen Ryan, President of the Albany Roundtable. “As author Richard Florida wrote, ‘Every single human being is creative. Economic growth is driven by creativity, so if we want to increase it, we have to tap into the creativity of everyone.’ Albany Barn is dedicated to creating a place for artists, neighborhood residents and the public alike to create, collaborate, present and explore, particularly those who cannot afford or otherwise access such space and services. In doing so, Albany Barn is fostering a more vibrant and sustainable city. We are delighted to honor Jeff and Albany Barn with the New Patroon award.”

The featured speaker for the October 10 luncheon is attorney and political analyst Bruce Gyory, who will share his thoughts on the 2012 elections. Bruce has over 28 years of experience as a lawyer, served three Governors of New York (two as Senior Advisor), and is now part of the team at Albany’s Corning Place Communications. He is an Adjunct Professor of Political Science at the University of Albany, and received a Bachelor’s degree from Columbia University and a Juris Doctor from New York University.

The Albany Roundtable established its Good Patroon Award 1988 to celebrate outstanding contributions to the community by institutions and individuals. While the Good Patroon Award has traditionally honored organizations and individuals with a long record of service to the community, the
Roundtable launched its New Patroon Award in 2011 to highlight and encourage the work of newer organizations.
The most recent Good Patroon Award winners include Amy Klein and Capital District Community Gardens; Maude Baum, Artistic Director of eba Dance Theatre; housing and social justice advocates Roger and Maria Markovics; and Christine M. Miles, Director of the Albany Institute of History and Art. Catherine Hedgeman and The Stakeholders, Inc., received the first New Patroon Award in 2011.

The October 10 Roundtable Luncheon begins at 12:00 noon and will be held at the National Register-listed University Club of Albany at 141 Washington Avenue. The luncheon is open to the public and the cost is $20, which may be paid at the door. This year, the Roundtable is also offering its guests the option of paying in advance with a credit card at www.albanyroundtable.com. The University Club will serve lunch from 12:00 noon to 1:00 p.m., with the program commencing at 12:30. Reservations are required by Tuesday, October 9 and may be made by prepaying online, by calling 518-431-1400 (the Albany Colonie Regional Chamber of Commerce) or by sending an e-mail to albanyroundtable@yahoo.com.

“When he died in 1839, Stephen Van Rensselaer III was remembered as ‘The Good Patroon’ for his benevolent attitude toward the residents of Rensselaerswyck,” said Ryan. “The Good Patroon and New Patroon Awards are the Albany Roundtable’s means of honoring those leaders who make our community a better place to live. We are so pleased to be able to present Jeff and Albany Barn with this award.”

Posted by Moderator at 4:03 PM No comments: